13 Oct Join the #ARevolution Post #1: What is Augmented Reality?

Posted at 22:13h in General by Todd Nesloney
0 Likes
Share 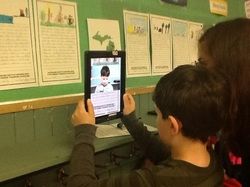 Augmented Reality is something that has really taken off in the educational world as of late. There have been many who have tried to define exactly what Augmented Reality (AR) is.  Is it just a fancy QR code?  Can it really transform your student’s learning?  What in the heck is AR? Our hope with this week’s article is to really give you a clear view of what exactly the term Augmented Reality means. 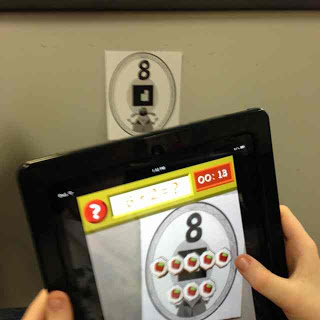 PBS Kids: Fetch! Lunch Rush app
Augmented Reality is defined in the dictionary as: “an enhanced image or environment as viewed on a screen or other display, produced by overlaying computer-generated images, sounds, or other data on a real-world environment.” (dictionary.com).
There are two ways I like to describe the magical experience of augmented reality to someone new. Picture yourself walking through the halls of Hogwarts. The pictures hanging on the walls of Hogwarts are not your normal, static pictures but are alive and interactive with the students. Another example to think about it The Night at the Museum. During the day the exhibits are your normal exhibits, but at night they come to life. This is the power augmented reality brings to education. It brings the learning experience to life!
Recently, we sent out a survey asking other educators to define the term “Augmented Reality” and what exactly it means to them.  Here are a few of the responses we received:
“Augmented Reality gives “life” to student work. It takes ordinary to extraordinary and super to super-sensational as student effort becomes a marvel!” – Diane Peterson (@dpe40317)
“I see AR as adding digital layers to the real world in order to connect information, thoughts and feelings across time.” Stephen Lethbridge (@stephen_tpk)
“Technology that allows you to have experiences that you cannot normally have”  Terri Eichholz (@terrieichholz)
“Augemented reality provides experiential learning that is layAR-ed into-or on top of and when scanned like magic brings the image being scanned to life!”  JoAnn Delaney (@JdelaneyJoAnn)
We see Augmented Reality as a game-changing tool and the future of educational technology.  It takes the world that’s right in front of us and enhances it.  It can be something as simple as scanning a paper and having an instructional video pop up all the way to scanning a photo and completely interacting with the 3D world that has appeared! 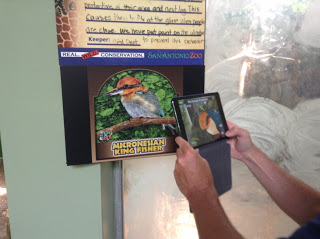 *
We’ve seen augmented reality used in many different settings from the supermarket, zoos, museums, and even NASA!  Corporate America is also embracing the idea behind AR and the engaging experience it brings customers.
Some have called AR, just a fancy QR code, but we see it as so much more. We like to call it a QR code on steroids because it can do so much more. Unlike a QR code, AR does not require a URL to function. You can make it an augmented reality experience engaging with interactive click throughs to make phone calls, text messages, to write an email, add events to calendars, and much more.
Well where does this leave us with Education?  How can this new and innovative tool be used in the educational world?  Tune in next week as we discuss “Why use AR in Education?”
Want your quote to be featured? Fill out the AR Survey
Comments