Posted at 15:27h in General by Todd Nesloney
0 Likes
Share

I still remember the advice someone gave me…they said, “Now you’re dealing with adults.  And you’re exceptional at handling children, so just remember, adults are just kids in bigger bodies.”

At first I laughed at that, but the more I’ve worked with adults the more I see it’s true.

One thing we started at my school was “hats off” cards.  Whenever a child was caught doing something exceptional, an adult could write them a hats off card, and that child would get to come to the front office and one of us up front would call home and let their families know what a great job they were doing.

When we started doing that it changed a lot of things.  It changed our kiddos; they wanted to be recognized, but more importantly in front of their families.  It changed our families; countless parents choked back tears as we called because no one had ever called home to tell them something great about their child.

As I made phone call after phone call, the advice I was given about adults came to my mind.  And I thought, “Why don’t we do something like this for adults???”

So in October I sent out a Google Form to my school family and asked them for their parent(s) addresses and phone numbers.  I told them I was working on a campus project.  I also let them know that if they did not have a parent still living (or if they were estranged from them) to put someone who holds that kind of place in their life.

Then over the month of December, I wrote cards to each and every family member on that list.  I told them their “child” worked at our school, I listed some qualities I liked about that person, and I told them how much better our team is because of having someone like their son/daughter on board.

Then over Christmas Break, I mailed them.  I wanted it to be like a special Christmas surprise for the families over their break.

I think I got 11 different messages over the break from people telling how much the simple act of a card meant.  But I think it most hit the parents/family members.  Think about it….how often do we receive feedback from our adult children’s employer about how much they’re appreciated?  We don’t enough.  It needs to happen more.

So this was phase one.  Phase two, starting in January, will be to do random phone calls out to these parents about awesome things their “children” are doing at our school.  If we recognize kids for this, why can’t we recognize adults too?

So get ready family at Webb Elementary, because “Hats Off” cards aren’t just for kids anymore!

And to any other administrators reading this, I challenge you to do something like this.  It really makes a world of difference.  Did I have to pay for stamps for 80 staff?  Yes.  Did my hand hurt from all the writing?  Yes.  Did it take hours? Yes.  But my hope and belief is that the ripples will be felt for a while to come. 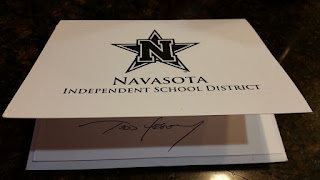