Posted at 22:55h in General by Todd Nesloney
0 Likes
Share

There was an image I saw once of an iceberg.  It had the tagline of “90% of what is happening goes on, unseen, beneath the surface”.  I have found that to be true time and time again. 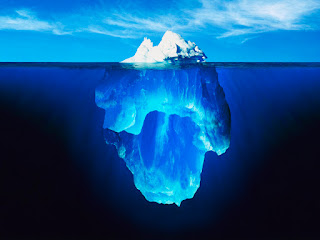 http://www.snopes.com/photos/natural/iceberg.asp
Everyone is fighting a battle.  Some of the battles are bloody and do quite a bit of damage to the heart.  And many of those battles go unseen by the masses at large.
Like everyone else, I’ve experienced my share of loss.  One of the first funerals I can remember attending was that of a little boy named, Adam.  Adam was a 4 year old boy that I had worked with in different avenues at church.  He passed away unexpectedly, while I was a senior in high school.  It was the first time I truly felt like my heart was ripped out.
Then my grandmother passed away.  She was my own personal cheerleader.  She is a huge part of the man I became today.  I wrote about the impact she left on me when she passed here.
The only other major loss I can recall is a college student named Natalie.  Natalie was the daughter of a co-worker of mine, and the best friend of my wife.  She passed away from a head on car collision.
Loss is never easy.  The holes it leaves are holes that are impossible to fill.  There are days that are better than other days, but there’s still sadness.
Over the last few months, I’ve been dealing with an “iceberg” type battle.  A battle that only a few of my closest friends know. My grandfather, the man who was married to my grandmother that I wrote about, has been dealing with health issues.  My mom always tells the story that 6 months before I was born, he was diagnosed with cancer and told he had less than 6 months to live.  Well, 30 years later he’s still here.  He’s a fighter, just like my grandmother was.  Makes sense on why they were the perfect match and one of the best examples of what a marriage could/should look like.
Ever since my grandmother passed my grandfather has faced even more cancer related health issues.  And over the last month, it’s become pretty severe.
So severe that my father called me this past week and told me I needed to find the time to come see my grandfather.  That there was a week or so left according to doctors.
I often feel like I have to be the rock of my family.  I have to stay the strong one.  At work, at home, everywhere.  I have to hold it together.
The moment my dad told me I need to come say goodbye, I knew things were serious.  So on Sunday, my wife and I drove up the hospital where they are keeping him.
I’ve seen my grandfather in the hospital many a times.  But I was unprepared.  The moment I walked into the room and spoke to him, I had immediate flashbacks of when I saw my grandmother for the last time.  It took my breath away.
This was not the man I grew up with.  This was not the man I so often looked up to.  This was a shell of himself.  This was a tired man.  A man who had fought every battle he could.
He was able to recognize me and Liz.  He was able to say hello.  And he was able to tell me he couldn’t get out of bed anymore because his legs had given up.  And that was it.  He couldn’t say anymore.
So I just sat there.  I sat next to him, and was just there.  He fell asleep within what felt like seconds of him saying he couldn’t get out of bed anymore.  I sat next to him for a little.  Then knew I had to leave before I fell apart.
He was so knocked out, he couldn’t be woken, so I leaned down, touched his arm, and told him goodbye.
It’s so hard to explain what it feels like to look at someone you’ve known your entire life, someone you love so deeply, and tell them goodbye.
The only other time I’ve had to do that is with my grandmother.  It ripped my heart out then, and having to do it again with her other half, brought back every memory.
I haven’t allowed myself to fall apart until writing this post.  I needed to get it out.  I needed to release it.  I have an incredible group of guys who check on me and who have known this is going on, and I haven’t even been able to discuss it out-loud until today.
I write this post, in part to share the story, but also to express something I was so deeply reminded of this weekend.
Enjoy every moment.
Every single moment.
My grandmother was my grandfather’s entire world.  When she passed we all worried about him.  For the last few years, since her passing, he has gone to her gravesite every single day.  Rain or shine.  He always said he had to share with her what happened during his day.
I look back on so many memories of my grandparents.  Of all the life lessons they taught me.  Their strength, their love, their compassion, their drive, and so much more.  But most of all the life they chose to live.  They cherished the moments.  They celebrated, they cried, they cheered, they did it all.
Life is short.  We’ve all heard that before.  Sometimes that phrase doesn’t become real to us until we’ve had that personal reminder.
When I look at the kids and adults I work with every day, I’m reminded that everyone is facing a battle.  That some of those battles are quite bloody to the soul.  That some of those battles will never be known or shared publicly.  But they’re there.
So I’m trying to make it more of a point to love harder.  To forgive faster.  To understand deeper.  To enjoy every single moment I have, because I never know when it will be my last.