Posted at 22:39h in General by Todd Nesloney
0 Likes
Share
I’ve written blog posts before about people I recommend following.  And I haven’t written one like that in a while so I figured I throw a few more people at you, who aren’t “widely” known, but are AMAZING educators and great resources.
I have always believed that you are only as good as the people you surround yourself with, so why not surround yourself with the best.  So here are a few that you may have never met, but I challenge you to connect with and learn from them, they ROCK!
So, here are 8 educators that I think are worth following! 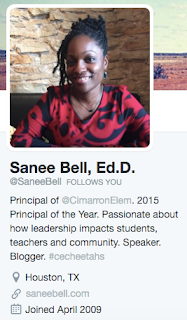 Sanee Bell is an administrator in Katy, Texas.  She is phenomenal.  There are few people that I meet and am in awe of immedately.  Sanee is approachable, generous, and extremely passionate and kind.  She treats everyone with extreme respect and is always willing to share her ideas, gain ideas from others, and always looking to do what’s best for kids.  Sanee is someone that I am already planning to go watch in action at her school soon because she is such an inspiration to me. 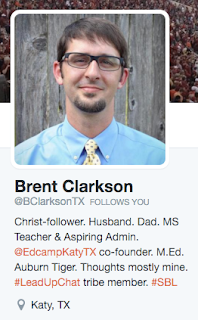 I’m not even quite sure when I meant Brent, but Brent has taught me far more then I think he’ll ever know.  Brent is a secondary teacher in Katy, Texas.  I have had the opportunity of spending time with Brent at several EdCamps as well as several days with him at the What Great Educators Do Differently (WGEDD) Conference.  Brent is a powerhouse.  He’s incredibly intelligent, funny, and is super passionate about doing what’s best for kids. He’s creative and always open to advice and new ideas.  Brent makes me laugh but also gets me thinking.  He’s a kind and honest man as well.  I respect Brent so much and the work that he does with kids. 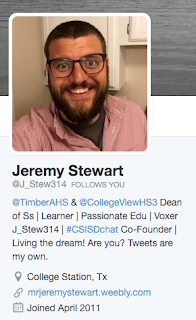 Jeremy Stewart is an administrator in College Station, TX.  When I think of personality and passion, Jeremy immediately comes to mind.  Jeremy has such a huge heart for those hurting kids, those forgotten or abandoned one.  But more than that Jeremy just has a huge heart for people in general.  I had the pleasure of spending two days learning alongside Jeremy recently and I was blown away by the maturity yet childlike joy he possess.  Jeremy is also one of those people who is going to do what’s best for kids, regardless of what others think.  I have so much respect for this man. 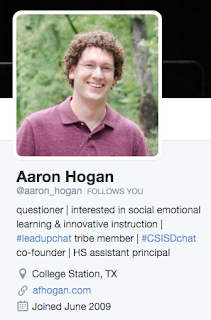 Aaron is an assistant principal in Texas.  I have had the pleasure of attending a few EdCamps that Aaron was at, as well as plan an EdCamp WITH Aaron, and spend a few days with him at a conference.  I also had the extreme pleasure of watching Aaron give an ignite talk that blew my mind.  Aaron has such a servant’s heart.  He is kind and listens intently.  He is genuine, yet honest.  I try to soak up every ounce of wisdom from Aaron every time that I can. Aaron is also an incredibly gifted blogger. Aaron has big things on the horizon for him, I can just feel it. 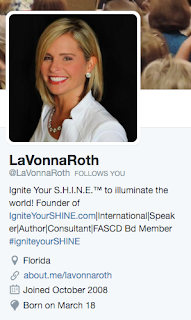 I had never met LaVonna before watching her speak at the WGEDD conference recently.  And WOW.  Blown away doesn’t even begin to describe this amazing woman.  She was passionate, encouraging, and hilarious.  This is someone I am dying to get to know more.  I left her session ready to tackle the world, and I also got to speak with her a little afterwards and she was just a genuine and hilarious educator.  You should definitely connect with LaVonna. 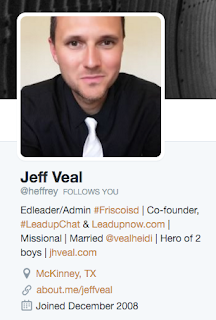 I have yet to meet Jeff face to face, but I look forward to the day that I do.  Jeff is such an inspiring leader and trail blazer.  Jeff is also super encouraging and such a genuine and kind soul.  He co-founded #LeadUpChat with can often be seen trending on Twitter on Saturday mornings.  His wife, Heidi Veal (who is also AMAZING), are both educators.  Jeff is also a very gifted blogger who shares from the heart and impacts more lives then he’ll ever realize. 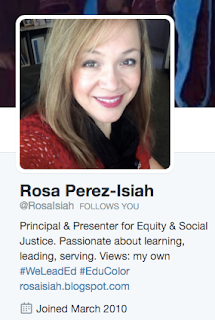 Rosa is an administator in California.  I had the pleasure of meeting her face to face while at NAESP in California this past summer.  Rosa is a firecracker.  She is incredibly passionate about kids, but even more so she’s always sharing her ideas and resources with others.  Rosa is such a voice for those students who are often forgotten or underserved.  I admire her and the work she does so much. 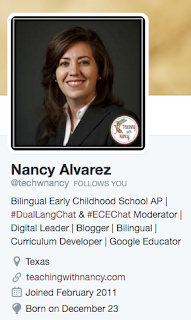 Nancy Alvarez is someone that I have great respect for, and she probably has no idea (I need to be better about that!).  Nancy does incredible work with bilingual students.  But even more so than that she is someone who oozes love for kids.  She has a big personality that draws people in and is always willing to share and encourage.  Nancy is someone I am dying to see in action some day!
So there you go!  There are 8 educators I think are worth following. Show them some love.  Follow them, connect with them, and let’s all learn together!
Comments