The Pilot is the Last Off #KidsDeserveIt

12 Sep The Pilot is the Last Off #KidsDeserveIt

Posted at 00:52h in General by Todd Nesloney
0 Likes
Share 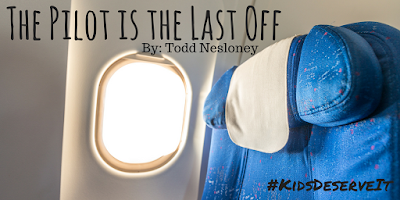 I just returned from watching the movie “Sully” about the Miracle on the Hudson.  For those of you unfamiliar with the events from several years ago….a plane was taking off from NYC and while ascending it hit a flock of birds.  The birds took out both plane engines.  While deciding if he could turn around and land at the airport, the pilot Chesley Sullenberger, determined he couldn’t make it and instead made the decision to do an emergency landing in the Hudson River.  All 155 passengers and crew survived.

While watching the movie and seeing the kind of leader that Captain Sully was in that instance I couldn’t stop thinking about education administrators and the parallels.  Here were some of the things that stuck out to me.

1. The pilot always remains calm.  Every leader knows there are days that are more stressful than others.  But even in the midst of a crashing airplane, Captain Sully remained calm and collected.  He trusted in his instinct and did what needed to be done to protect those onboard.  As leaders we must do the same. Though I struggle with always remaining calm in heated moments, I know how important it is that we do.  Our team needs to know that it will all be ok.  That together we can do this.  That the leader has things together enough that others have a little more hope in what’s coming as well.  For when the leader doesn’t remain calm, the whole plane goes crazy.

2.  The pilot knows it’s not all about him/her.  Again and again Captain Sully gives credit to his entire crew and to all the emergency responders, Ferry Employees, NYPD, and more for saving all 155 souls aboard that plane.  He never takes credit.  Good leaders do the same.  They know that for this thing called “school” to work it takes every single piece working together.  The custodians play just as of an important roll as the teachers, the nurse, the front desk reception, the cafeteria workers, the librarian, and so on.  As soon as a leader claims credit for the success of a school, you know that leader has no clue about what’s going on.  We must work together and give credit the entire team, every part, when success is reached.

3.  The pilot is more concerned about others than himself.  One thing that stuck out to me greatly was the Captain’s concern for all aboard the plane.  As soon as they were rescued, all he cared about was how many were alive.  How many survived? Where were they? Who was hurt?  He knew he had 155 souls on board.  He wanted to know if they were ok.  A leader must care so deeply about the people he/she is left in charge of.  They must check in on them, take care of them, hurt alongside them, and seek to help them.  If a leader is to lead they must know what’s going on with their crew.

4.  The pilot answers the hard questions.  Throughout the movie, Captain Sully is continually questioned about the decisions he made when deciding on an emergency water landing.  His integrity is questioned, his demeanor, even his past.  As administrative leaders it is the same.  In the end we must answer to what happens in our school building.  When a fire breaks out, when a child is hurt on the playground, when someone is caught destroying property or stealing, and more.  The leader must answer to what has happened under his/her watch and what decisions were made after.  And often times, the leader must answer those questions in a closed room and cannot share his/her responses with the public at large.  That is probably the hardest part.  When a leader must answer to things that have happened, but cannot share with his/her staff what went on behind closed doors.  But leaders must.  They must be ready to answer the hard questions and stand behind the decisions they make.

5.  The pilot is the last off.  In the movie Captain Sully makes sure all of the passengers and crew are off the sinking plane before he decides to exit.  He wades through freezing water just to check every last seat.  In education, as leaders we must do the same.  We must continually check in to make sure everyone is where they need to be and is safe and sound.  We check on the kids, we check on the staff, sometimes we even check in on the parents.  Those bodies in that school building are, in the end, our responsibility, and a good leader makes sure that they’re all taken care of before he/she disembarks.

There are so many other reminders that I took from this movie as well, but those are my top 5.  I hope to be even half the leader that Captain Sully was and still is.  I hope to lead with a calm strength, to take care of and care deeply about my crew, to answer the hard questions, and to always be the last one off the plane.

Though I have lots of work to do in becoming that leader, I know that every day I am growing just a little bit more.  If you’ve seen the movie too I would love to know what may have stuck out to you the most!