Posted at 12:54h in General by Todd Nesloney
0 Likes
Share

Before writing this post I really had to sit back and digest what took place yesterday.

But first let me start with a little backstory.  I was hired for my new position back in March.  Soon after getting hired, the discussion began about a keynote for Navasota ISD’s annual Symposium (it’s a 2 and 1/2 day conference put on by Navasota Teachers for Navasota Teachers).  They wanted someone who would inspire and challenge all at the same time.  They wanted Angela Maiers.
When I was hired I knew I wanted Angela working with my school as well.  Why?  Because I “met” Angela about a year ago.  She completely changed the way I viewed myself and my skill set.  She cut to my heart and changed the direction of so many things in my career and over the past year has become a really good friend of mine.
So when the conversation of Angela came up no one knew what to do or how to contact her, so I reached out and begged her to come.  Luckily, she was already going to be in Texas that week, so the planning began.
Angela started the day by giving her keynote.  She called it “Be Brave”.  And what a challenge that was!  The message was just the message I needed to hear, my team needed to hear, and my district needed to hear. A few of my favorite moments from the talk were…. 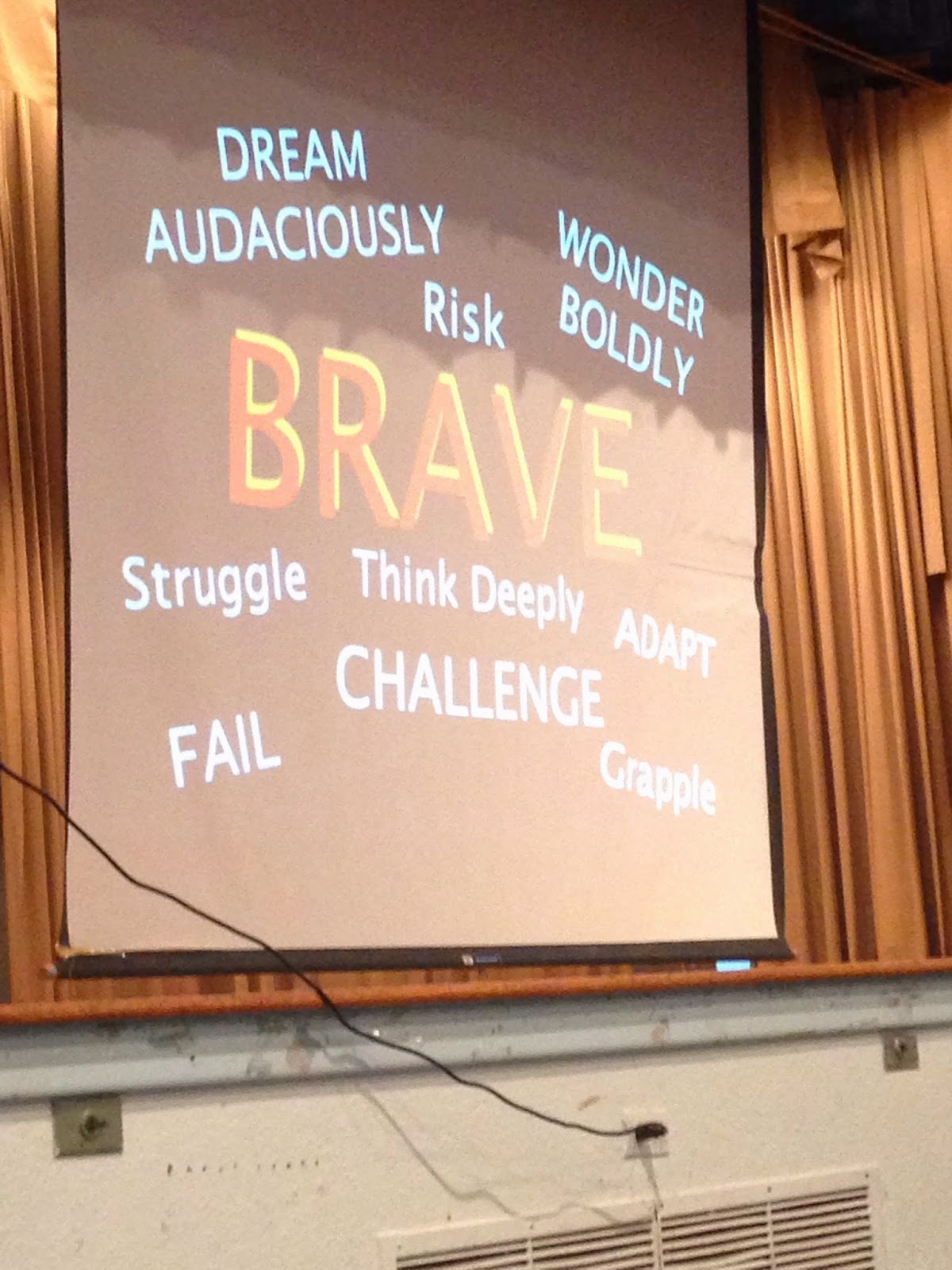 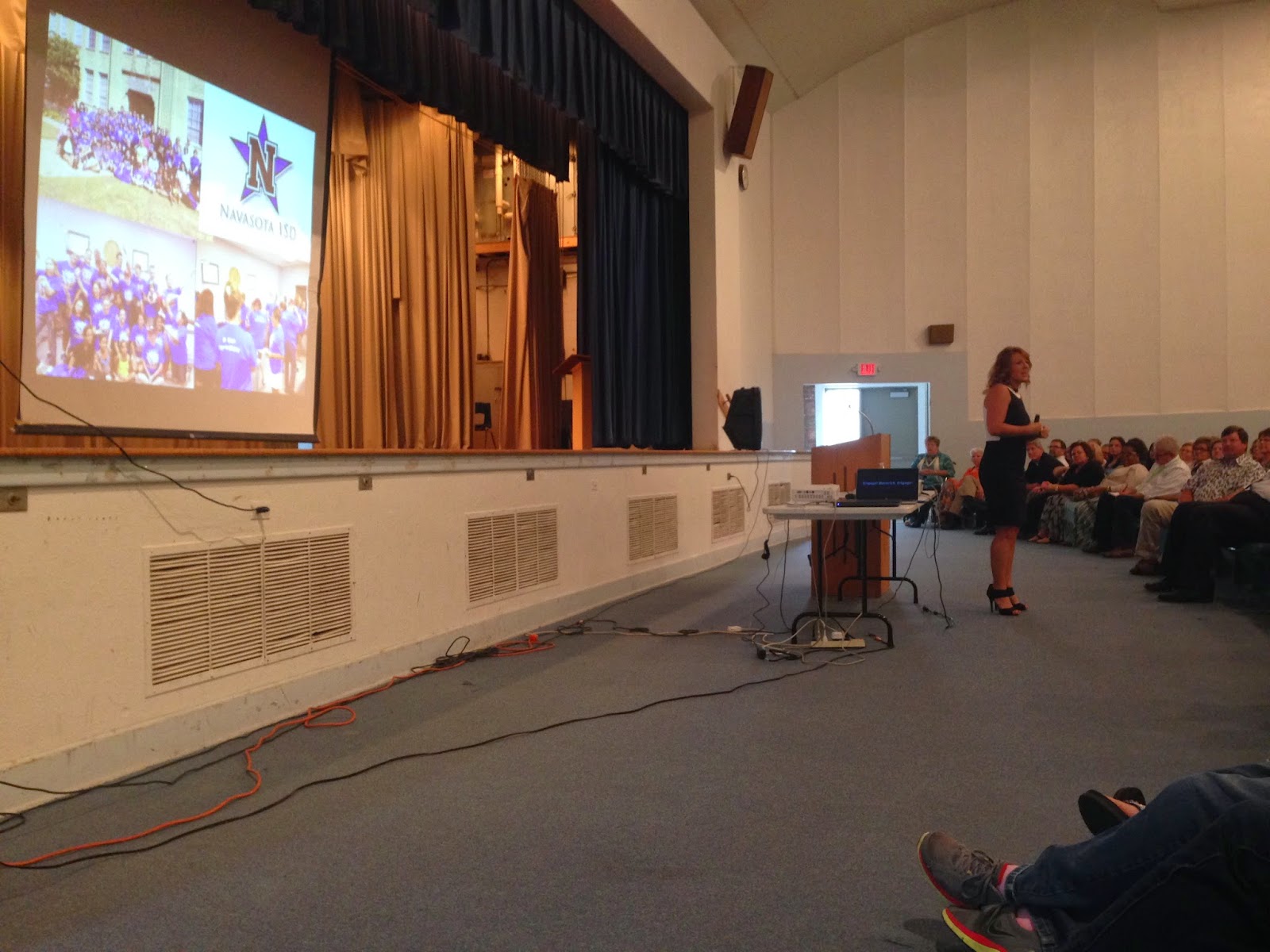 “Humility was the number one attribute, as designated by 4-14 yr olds, of the quality of a leader” @AngelaMaiers #NavasotaInt
— Todd Nesloney (@TechNinjaTodd) August 18, 2014

“When you as a leader have more than those you lead, you have a responsibility to give more than is necessary” @AngelaMaiers #NavasotaInt
— Todd Nesloney (@TechNinjaTodd) August 18, 2014

“The riskiest thing we can do as leaders, learners, and citizens is choose the safe route” @AngelaMaiers #NavasotaInt
— Todd Nesloney (@TechNinjaTodd) August 18, 2014

“It isn’t about me being great. It’s about me using what’s great about me to get others to be great” @AngelaMaiers #navasotaint
— Todd Nesloney (@TechNinjaTodd) August 18, 2014

“School has to be the reason for genius showing up. Not the reason for it to be hidden” @AngelaMaiers #navasotaint
— Todd Nesloney (@TechNinjaTodd) August 18, 2014

There are so many other little “nuggets of wisdom” that I could add in here, but that’s just a taste. 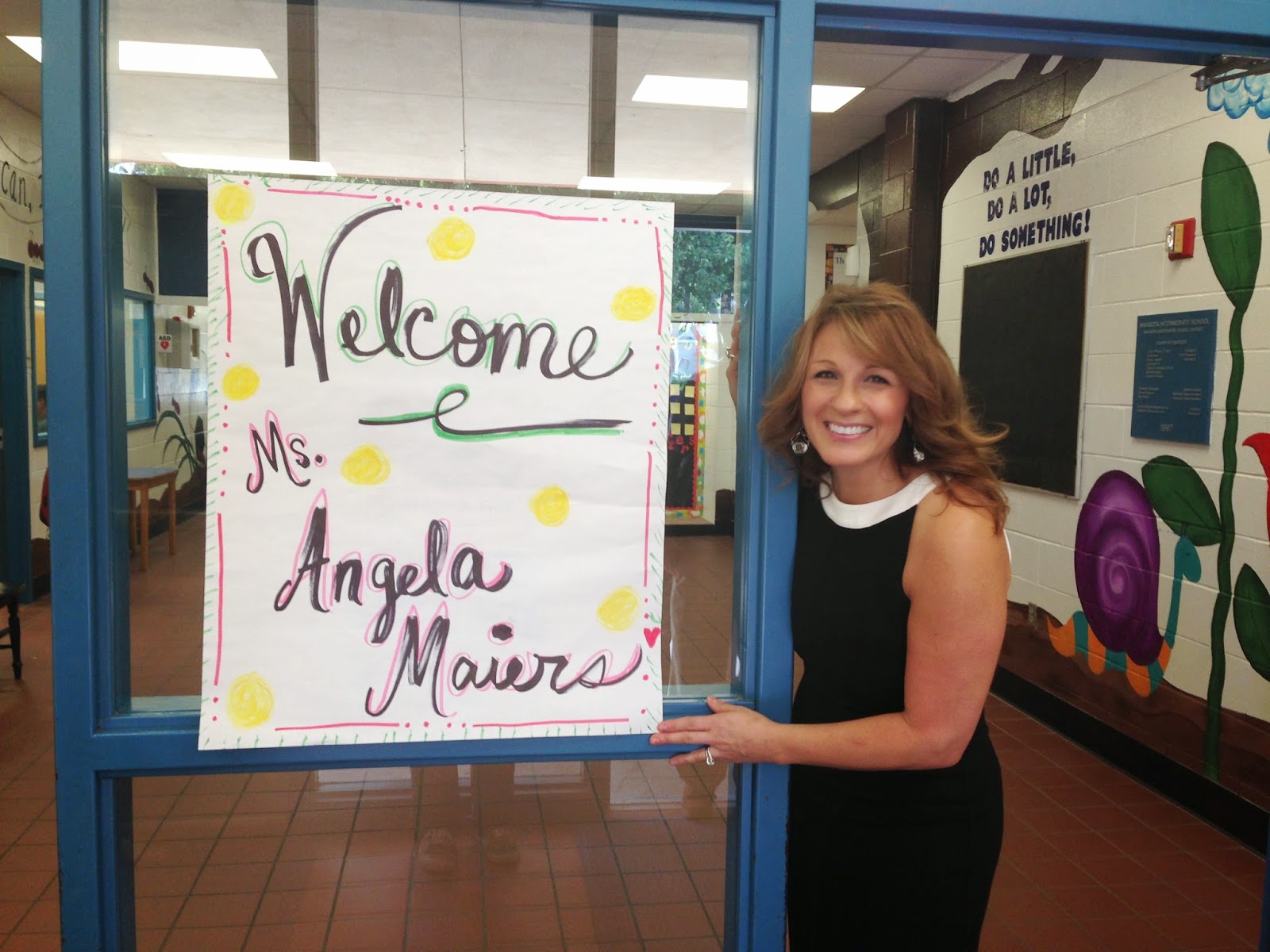 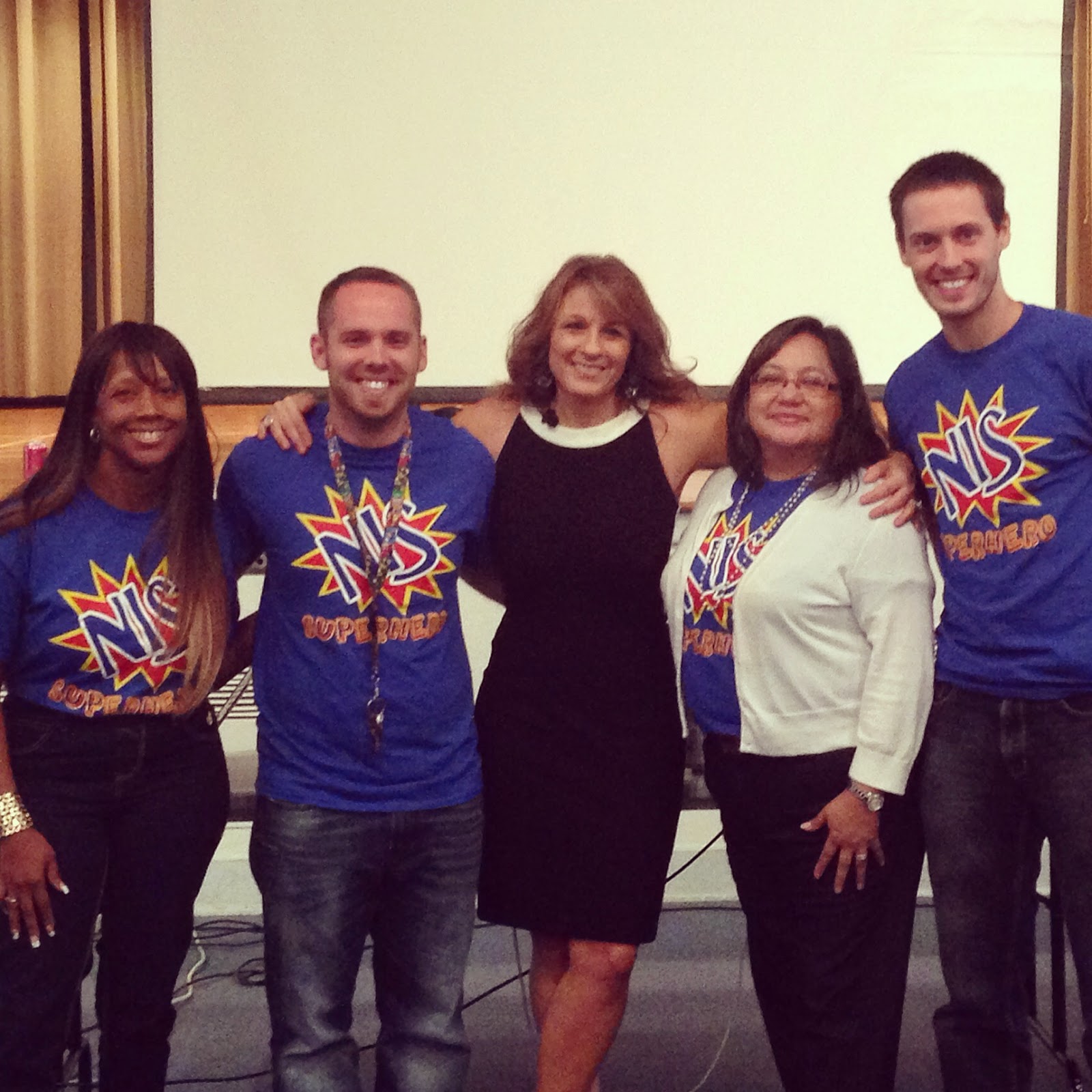 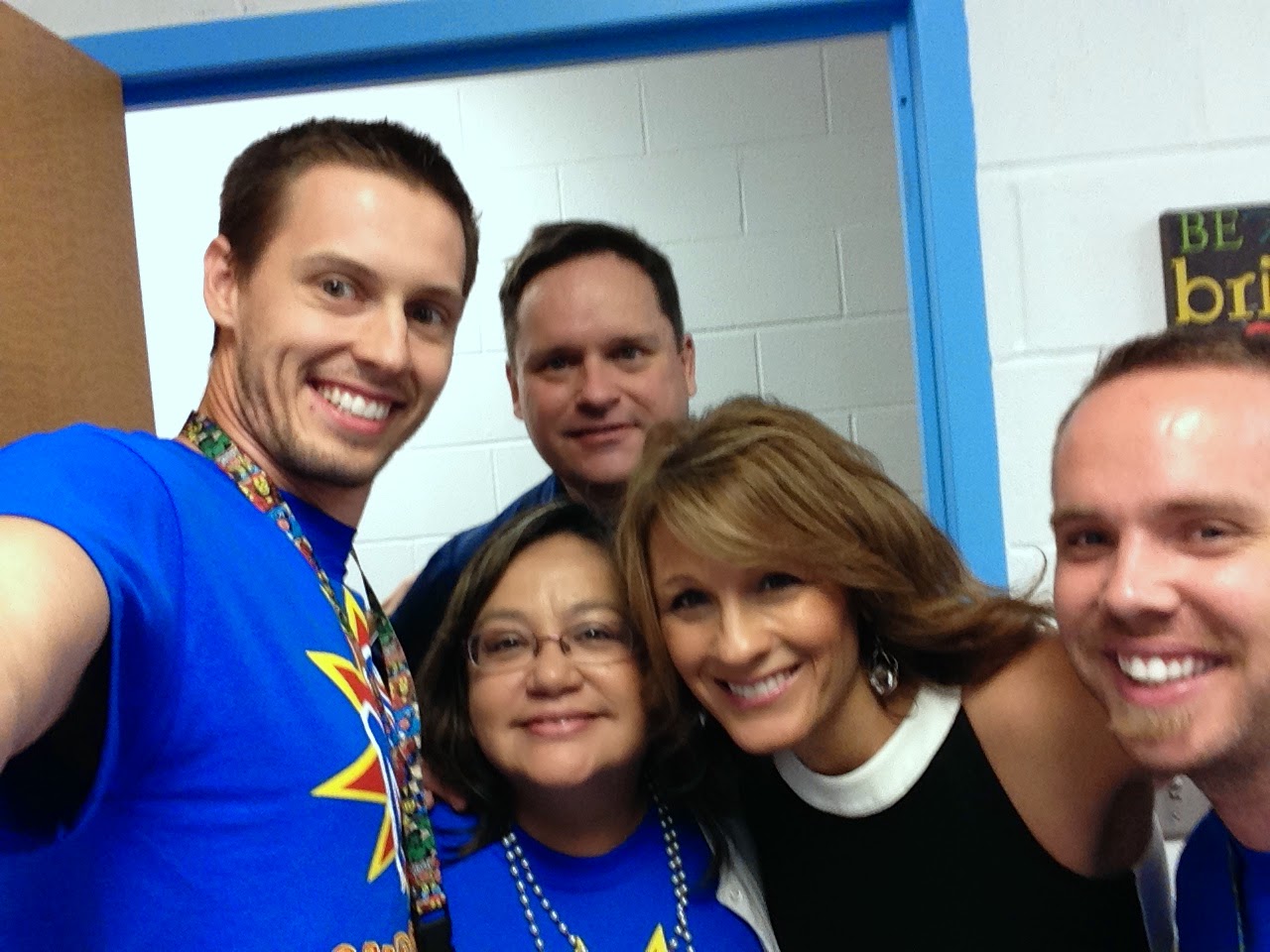 As we walked the halls, visited the classrooms, met the team, it was overwhelming.  I loved Angela’s comment of “I feel like I’ve walked into the school I’ve always dreamed would exist”  That was such a compliment.

I loved too that two of my admin team (Terry Garrett and Aaron Marvel) got to sit down with Angela and share a little of their story of what we’re trying to create down here. After the tour we enjoyed a quick lunch together, and then Angela headed over to the High School to lead an hour long session with NISD teachers about more implementation ideas.

Then the best part came.  From 2-4pm Angela got to work with just my campus (because she’s adopted us). 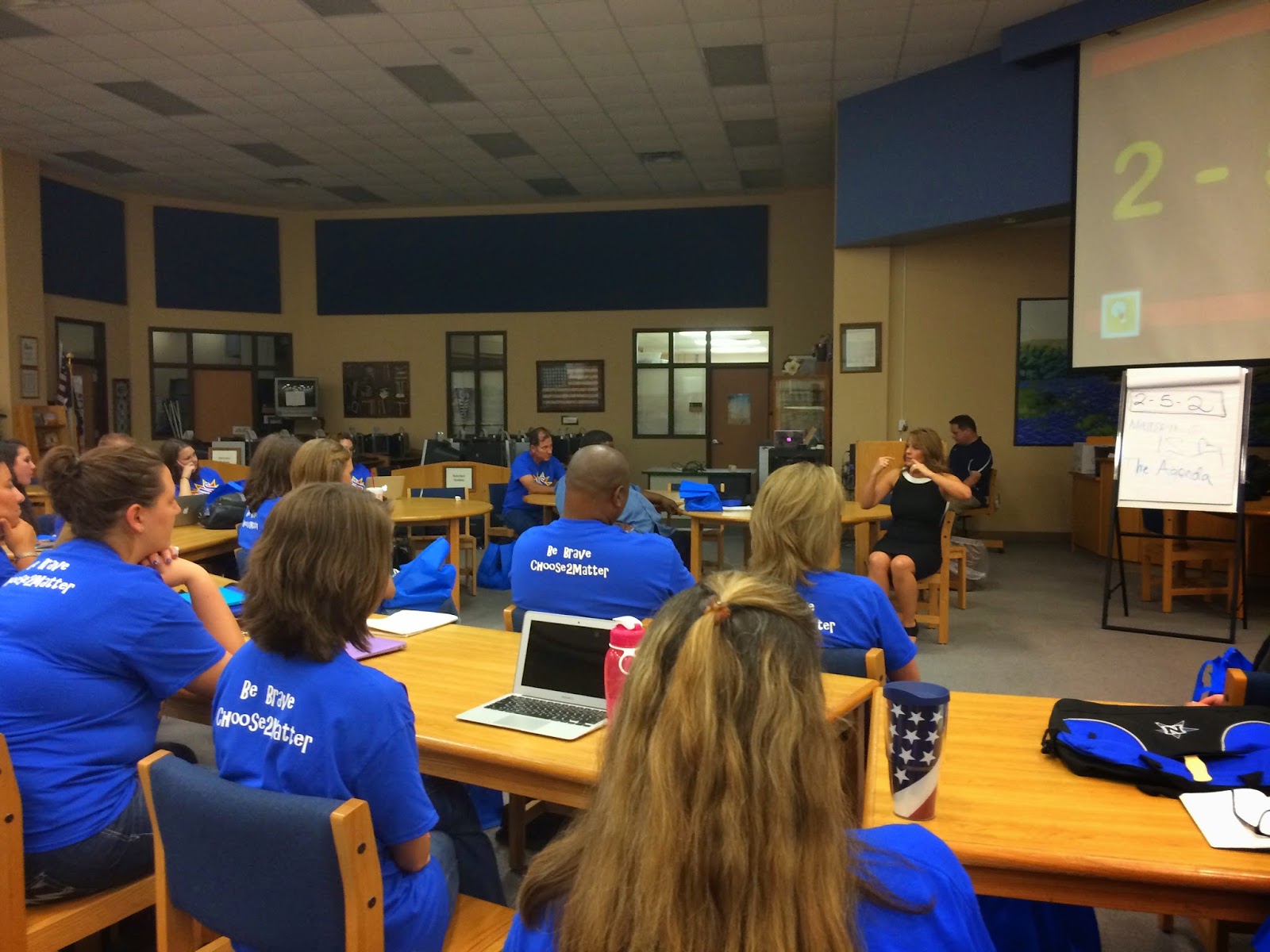 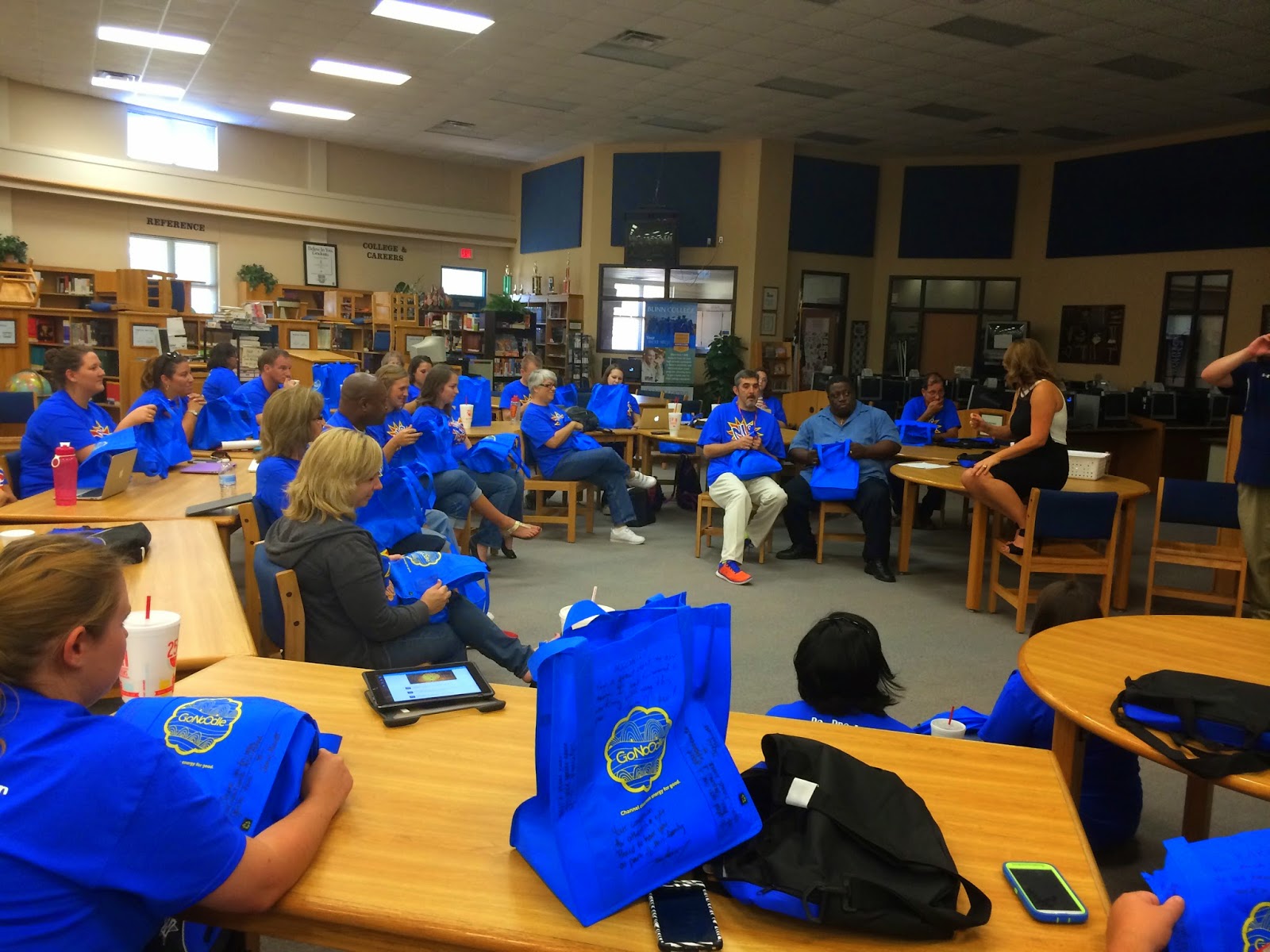 That two hours was so emotionally powerful and overwhelming.  We started the two hours with an idea my admin team had cooked up with Angela.  We got bags from GoNoodle, and myself, plus my 3 admin, wrote a special message from each of us on the bags to the person who would be receiving that bag.  We individualized every single one.  Then inside the bag we put goodies with little sayings on it.  For example we put a bag of Funyins and said “Enjoy your Fun-youngins”, and we put a pen that said “Leave your mark” and things like that. 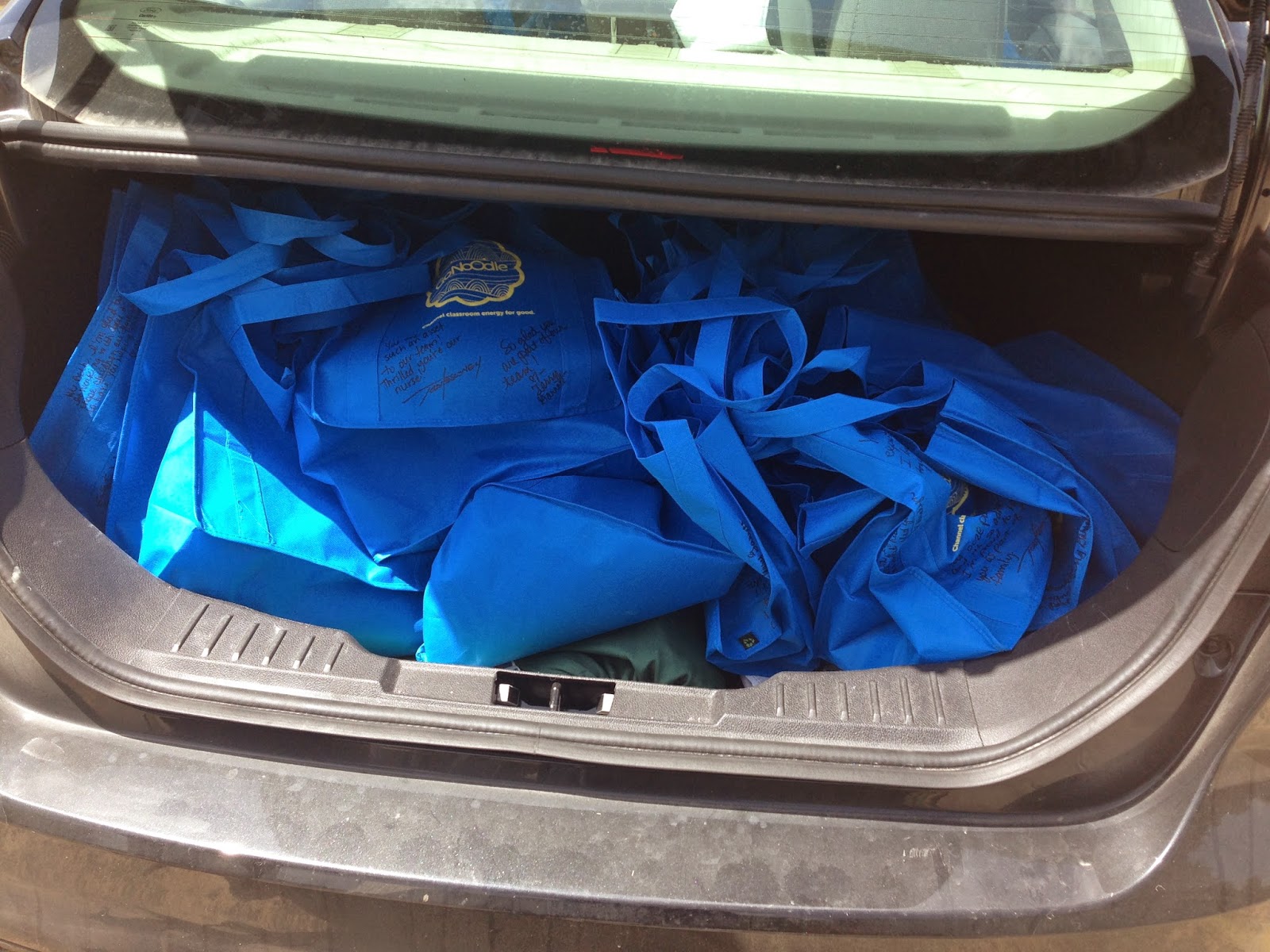 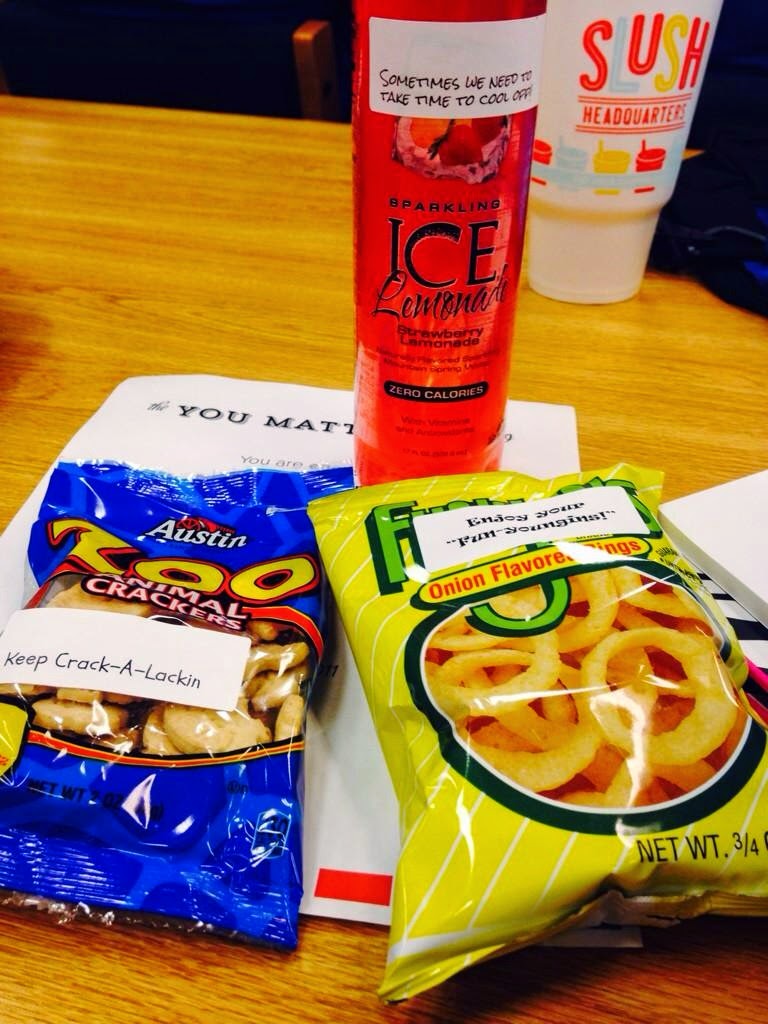 Right away we had some tears flowing.  It’s amazing what a personalized message and some special treats will do.  Then Angela lead us in several exercises and ideas.  The most powerful?  We had to get into our teams and we had to sit there while our team shared everything they loved about us.  That was tough.  It was tough for me, as an adult, to sit there and hear nice things said about me by my team.  It took every ounce of self control not to cry the entire time.  It’s amazing how just a few kind words of someone noticing something about you changes everything.  In that moment, we completed our transformation from the staff of Navasota Intermediate, and into a family. 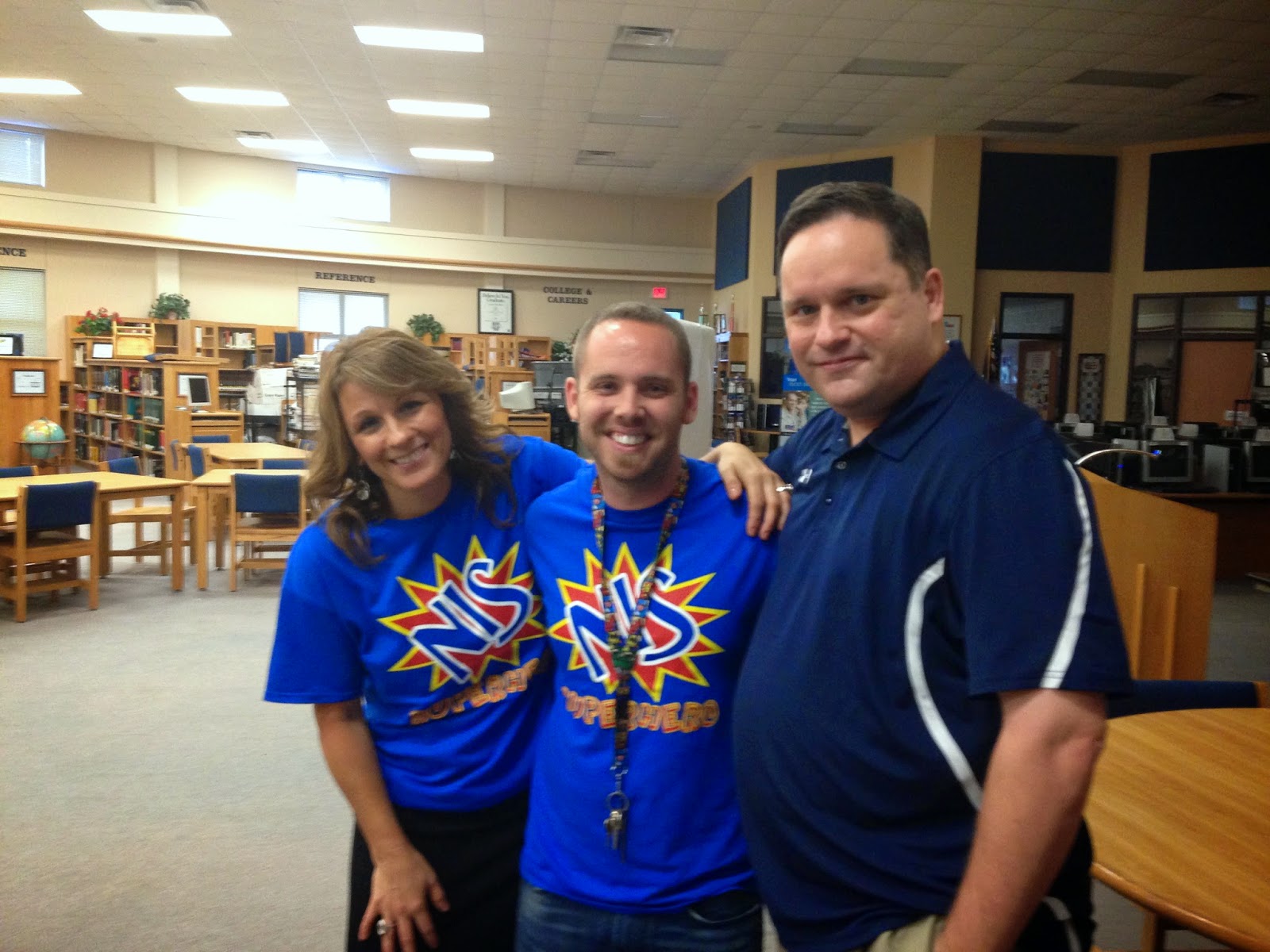 I’m not sure Angela will ever truly understand the impact she left on us.  It will take me quite a while to fully comprehend.  But we’re not the same, and we’re better for it.  Our ideas our flowing!  We know opposition will come.  We know the tough days will come.  Because like Angela said, when you challenge the status quo and try something different, it upsets those who are comfortable.  But like she also reminded us, Good is the enemy of great.  We must be more than just good enough.  There are so many little things that we plan to implement this year that will make sure every single person that leaves our campus knowing they matter, they have worth, and they are valued. 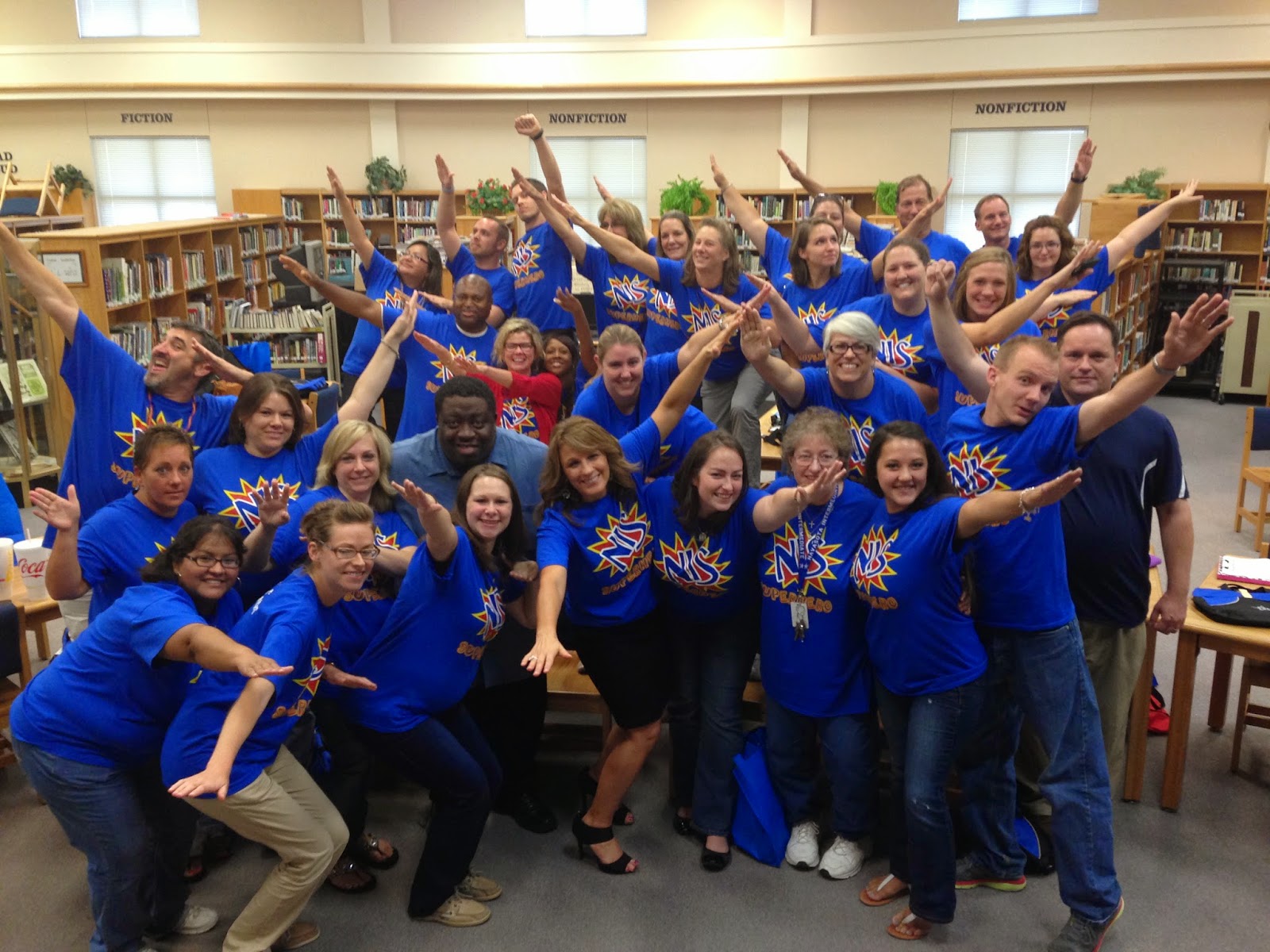