11 Twitter Accounts You’re Probably Not Following But Definitely Should

Posted at 02:47h in General by Todd Nesloney
0 Likes
Share

Since joining twitter I’ve become friends with or started learning from some incredible people.  People like Brad Waid, Drew Minock, Erin Klein, Adam Bellow, Eric Sheninger, Angela Maiers, and soooo many more.  People who have been on for a little bit and grown huge followings.  But I’ve also become “friends” with and started learning from people who are not only brilliant educators but also passionate ones.  So I wanted to share a few people, with a small following, that I’ve been learning from recently who you probably aren’t following now, but you definitely should be! 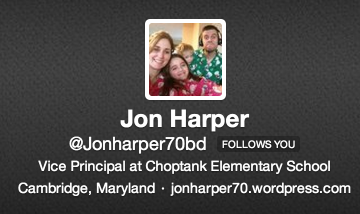 I love reading educator blogs.  From Pernille Ripp to Jimmy Casas, but man, I have never read a blog as powerful and moving as the posts that Jon writes!  Jon is incredibly articulate and has some great associations between his family and education.  Not only that, Jon is always sharing great ideas!

Terri actually found ME! haha.  Since then I’ve learned so much from her and had to extreme pleasure of meeting her F2F in December.  Terri is always sharing the great ideas about ways to incorporate technology into the classroom.  Not only that, Terri has also become quite the blogger too!!  Smart, articulate, and creative.  What more could you ask for?

Daisy is another I got to meet in the last couple of months.  I love hearing Daisy talk about how much twitter has transformed her career, because it’s so similar to my story.  Daisy is always sharing such inspiring things and doing some really awesome stuff with her students!  I would love to see her in action!

I have just recently connected with Jeromie and I already feel like he’s a great friend.  Jeromie inspires me every single time I see his tweets.  You talk about going above and beyond, this man is a prime example of that!  I have begged and begged him to come to Texas, but maybe one day soon I can meet this guy in person, who’s inspired me immensely.

Evan is an American educator currently in Japan who will soon be relocating to Germany.  This man is brilliant.  He has also become a really close friend of mine over the last couple of months.  He’s passionate about technology and also about teaching kids to their fullest potential.  He’s a must follow for sure.

Brant is an instructional technologist in Texas who I met face to face for the first time about a month or so ago.  In my short time connecting with him I have seen just how incredibly smart, but also kind hearted he is.  A wealth of knowledge and hungry to continually learn more!  This man is headed to do some great things!

John is an administrator up north who I met while he was still in the classroom!  We started flipping our classes together.  I have learned so much from this man, and as I move into my administrative role, I can’t wait to continue to learn from him.  He is incredibly gifted, kind, and a must follow.

Mike is an educator in Florida!  I love following his tweets and he’s got a great sense of humor!  This guy is one to watch for sure with the creative things he’s doing with his students.

Paul is Tech Specialist in Texas.  This man is incredible.  He’s so hungry for learning and always sharing great ideas.  Plus he’s a guy you can count on to ask a question, and he’ll be the one to find you an answer!  I learn stuff from Paul all the time!

Michael is a Music teacher out of Michigan doing incredible things with kids.  Recently I got to meet him and pick his brain.  This man has got it going on and is on the cutting edge!  Love his passion and creativity. 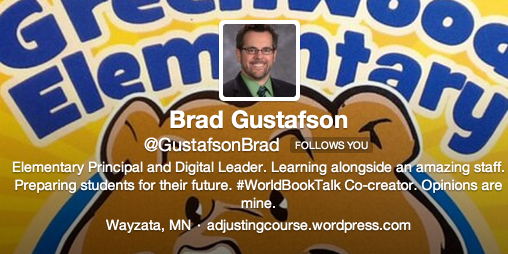 Brad is someone I now consider a very good friend.  He’s an administrator doing some INCREDIBLE things at his school.  Always positive and always trying to be on the cutting edge.  He is truly one to watch and one to follow immediately!

There are so many more I could recommend!  But recently these 11 people have been inspiring me and I wanted to share them with you!